I think an excellent argument can be made that there was no crime committed when Don Siegelman appointed Richard Scrushy to the hospital Certificate of Need Review Board and Scrushy made a hefty donation to the group Siegelman had set up to promote his proposed state lottery. At the very least, Siegelman was only doing what had been done many times before. Previous Governors had given Scrushy the same unpaid position. I don't know if any of them also solicited donations from Scrushy for some non-profit effort. I also think an excellent argument can be made that even if Siegelman broke the law, it may be a true case of political selective prosecution. One of his chief detractors, Lanny Young, also implicated some top Republicans on campaign finance violations, yet those allegations were never investigated, much less prosecuted. You might say prosecutors had blinders on. They wanted Don Seigelman. Period. I've also suggested that some of the same folks who pushed for Rove to be sworn in and questioned wore those blinders too when Rove was finished. They seem to believe everything Karl Rove said was a lie, or at least suspect, just as everything Mr. Siegelman did was innocent. I believe neither is true. I previously posted about Karl Rove's testimony, asking a question that neither fellow blogger Mr. Roger Shuler nor other seem to be willing to answer: what did they expect Rove to say under oath? Why were they even remotely surprised that he failed to "confess", and instead testified he didn't remember? They seem to see great Siegelman significance in the Q&A, but I think there's nothing there. Rove's comments add nothing to their arguments, but they go on endlessly parsing his words and pauses between words. In his latest post, Mr Shuler writes that my brain seems to have corroded from living in Montgomery these past eleven years, and that I fail to understand that the Siegelman case is bigger than the individual. I beg to differ. I believe my brain is actually sharper after 11 years hosting For The Record on APT! Here are two photos as evidence. 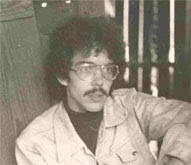 (Left, 1977 or so, Birmingham radio days) (Right, 2009, Montgomery) Who do you want in court on your side? (-: Mr. Shuler blogs that the case is bigger than Siegelman the individual, and it is. Most cases are. There are important legal issues involved, and allegations of misconduct by the people we pay to administer justice. All of that should be investigated---From the allegations against Judge Fuller to the lack of investigation into Mr. Young's allegations regarding Mr. Pryor and Mr. Sessions. But try for a minute to be dispassionate about it, to examine the facts. You include the "statute of limitations" in your list of argument in favor of Mr. Siegelman, saying prosecutors filed too late. If ever there was a "technicality" in the law, the statute of limitations is it. Should prosecutors be required to file on time? Of course. But it's a sign of desperation to spend much time making that argument when you are defending a man who is truly innocent.
Posted by Tim Lennox at 1:27 PM