Birmingham News editorial cartoonist Scott Stantis has accepted a similar position with The Chicago Tribune. He's been The News political cartoonist since 1996, and is the creator of the Prickly City strip that runs in more than a hundred papers. It won't be the first time Stantis' work has been in the Tribune. He is one of fifteen or so editorial cartoonists whose work is regularily featured on the Tribune opinion's page. At the same time, The paper once dropped Prickly City over a disputed quote by Ted Kennedy. Scott sad the syndicate that distributed the strip added quote marks without his approval. No hard feelings, apparently! The Tribune has been around since 1847. I don't know the current readership, but in April of 2008 it boasted 5.5 Million adult readers. Even with the recent upheaval in the business, I think it is safe to say the paper has about as many readers as Alabama's entire population. Scott is getting quite a promotion! 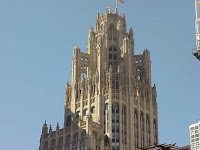 (I think that's his new office atop the 1922 Tribune building on the left.) Scott was an occasional guest on For The Record, and I always enjoyed his commentary...though we disagreed often enough. I'm sure Scott's conservative political leanings will earn him a parade along Lake Shore Drive, considering the fact that Chicago hasn't elected a Republican Mayor since 1931. Go Scott! [UPDATE: Here's the Tribune's story.] [The Monday (usually) Morning Media Memo is a regular feature of this blog.]
Posted by Tim Lennox at 10:45 AM