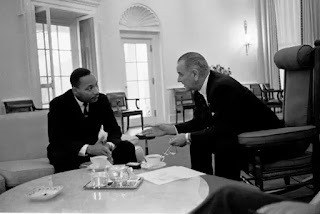 "King was foremost a minister who pastored to a local church throughout his career, even while he was doing national civil rights work. And he became concerned that his political ally Johnson was making a grave moral mistake in Vietnam. Johnson quickly escalated American troop presence in Vietnam from 75,000 to 125,000 in 1965. And by 1968, more than a half a million troops were stationed in the Southeast Asian nation." 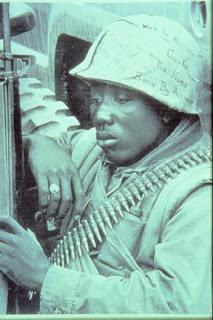 From an article on the Asia Times website about MLK's activism against the Vietnam War, which resulted in the deaths of some 53,000 Americans.

Overt racism was typical in American bases in Vietnam. Although initially uncommon at the start of the war, after the Assassination of Martin Luther King Jr., overt racism occurred at a higher rate.[3] Following the assassination, some White troops at Cam Ranh Base wore Ku Klux Klan robes and paraded around the base.[6][11]: 183  At least three instances of cross burning were confirmed to have happened.[12] Da Nang Air Base flew the Confederate flag for three days in response.[12][6] In addition to being used in response to King's murder, Confederate flags and icons were commonly painted on jeeps, tanks, and helicopters; bathroom graffiti proclaimed that African Americans, not the Vietnamese, were the real enemy. Black troops were discouraged from taking pride in Black identity, with one troop ordered to remove a "Black is beautiful" poster from his locker.[6] Following complaints from African American soldiers, Confederate flags were briefly banned but soon allowed after resistance from Southern politicians objected.[3] Black identity publications and speeches were restricted, with some commanders banning recordings of speeches by Malcolm X or the newspaper The Black Panther.[11] Despite segregation being abolished in the military, it still affected troops.[8]

(From a Wikipedia article HERE)