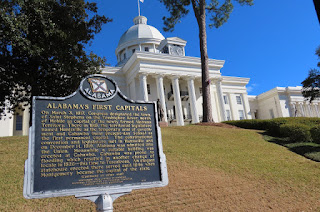 No Fooling!
I've been hired out of retirement by The Alabama Historical Commission as a part-time docent/tour guide in the Alabama Capitol Building in Montgomery! 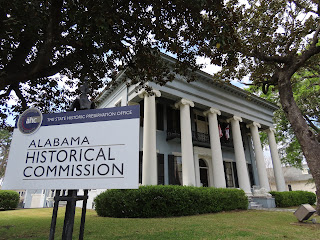 Friday was my first day, but it will be a while before I actually lead a tour. Look for me when you visit Montgomery!

Information about tours is HERE.

All of the people at the Historical Commission have been so welcoming! I will be honored to join them in showing off the 1849 building (The first capitol building in Montgomery burned in 1847, just two years after it was constructed!) 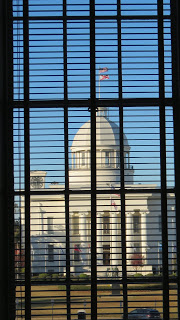 What started the fire? Unknown, but this 1847 newspaper article reports on it:

By far the most interesting of all Montgomery prints is that one, “The Burning of the Capitol,” December 14, 1849.” This picture originated as a daguerreotype made by the photographer, A. G. Park, who apparently, in partnership with S. Swan, had it lithographed by Sarony and Major, that celebrated firm long furnishing prints to the American public. This view shows Market Street from the steps of the Court House, which then occupied the center of the space which we call our “Court Square,” Immediately in the forefront is to be seen four iron posts which are erected in the center of the street, and which protect the cap of a cistern under-ground, a water supply for the downtown business houses. Ox-carts, covered wagons, drays, mule teams, Negroes, planters, and limited number of shoppers on the street, are in view. The scene illustrates smoke emerging from the top of the Capitol building, which at that time had no super-structure in the nature of a dome. The Capitol stairways were circular and on the outside of the building which has an inset portico fronting west and above a basement story. This print is by far the rarest ever issued for any of the inland points in the Southern States. Mobile, New Orleans, and Savannah coast town pictures appeared quite early, and the English travelers, who passed through this section after the visit of Basil Hall, in 1827, left quite a few Alabama River Prints.

In 1846, the building was located on pasture land owned by Andrew Dexter, on a place called Goat Hill. This first capitol building burned on December 14, 1849, little more than two years after its completion. Only a few walls were left standing. Gov. Henry Collier had only recently been elected and his inauguration was set to take place three days later on December 17, 1849. He was forced to take the oath of office at the Montgomery Methodist Church.(3)

Burning of the Alabama State Capitol Building December 14, 1849 – This view illustrates Market Street, now Dexter Avenue, as it appeared
about midday of December 14, 1819 when the original Capitol erected in
Montgomery was destroyed by fire. The print is from a daguerreotype
which was made at the time of the conflagration, the artist making his
view from the steps of the Court House, then located at what is known
in Montgomery as the “square.” This sketch was later one of the earliest
of the Saroney lithographs. The original is a rare print.

“It was never definitively ascertained how the fire originated, some supposing it accidental and some thinking it the work of an incendiary. The flames were first discovered issuing from the roof of the Representative Hall, about 1:15 pm, and while both Houses were in session. The fire burned rapidly and in less than three hours the building was in ruins. Most of the archives were saved. The ruins were cleared by March 1850, with a new building soon to follow." 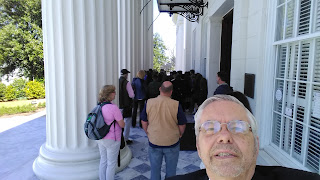 In training! Monitoring tours for a few days before flying solo later in the month. 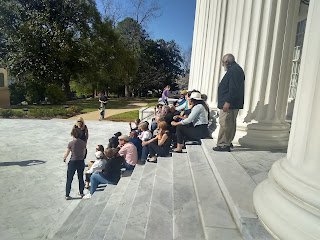 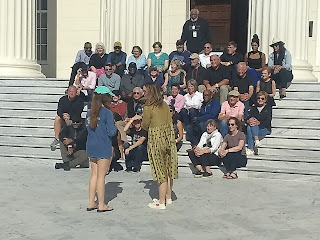 Thanks to longtime docent Aroine Irby for shepherding me! That's him standing at the top as a group of tourists from Seattle, Washington posed for a photo on Friday.