At the Capri Theatre: 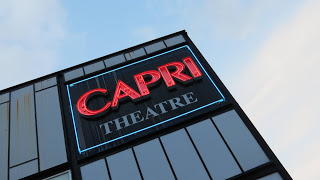 "As one reviewer put it, The French Dispatch may not be easy to explain, but it is fun to watch. Which is probably all you really need to know about the movie.

Well, also that it is a Wes Anderson movie (The Grand Budapest Hotel, Moonrise Kingdom, The Royal Tennenbaums, and a surprising number of commercials), so you know it is obsessive, meticulous, quirky and amusing in odd and unexpected ways.

A story about fictional journalists in a fictional French city publishing a fictional newspaper that is more than a little reminiscent of the New Yorker Magazine in its mid-20th Century days.

With more cast members than we are able to list, The French Dispatch is a perfect pre-Thanksgiving treat."